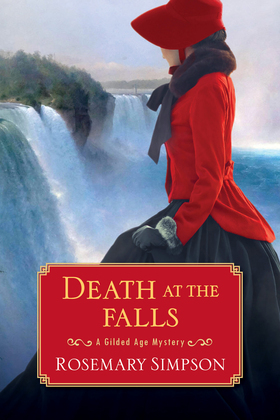 Death at the Falls

by Rosemary Simpson (Author)
Buy for $22.95 Read sample online Download sample
Fiction Mystery & detective Women sleuths Historical
warning_amber
One or more licenses for this book have been acquired by your organisation details
When newly minted lawyer Prudence MacKenzie and ex-Pinkerton Geoffrey Hunter travel to Niagara Falls on a mysterious assignment from Lady Rotherton, they quickly discover familiar dangers beyond the water’s edge . . .

DEATH AT THE FALLS

October 1890: As Prudence and Geoffrey settle into the most elegant hotel in Canadian Niagara, they observe a popular tourist area torn between natural beauty and industrial power. Also attracting their attentions are the antics of daredevil Crazy Louie Whiting, determined to be the first person to navigate the falls without drowning. Shortly after their arrival, Crazy Louie sends a specially designed test barrel containing a sheep over the falls. But when the barrel is retrieved and opened, the battered body of a local Tuscarora Indian spills out.

When Geoffrey and Prudence learn of the dead man’s suspicions about rampant bribery among greedy land developers and local officials, they wonder if there’s a connection to their client, Rowan Adderly. A young woman whose father disappeared while she was a child, the land she is due to inherit could be worth millions—and inevitably the sharks have come feeding.
In a move to block Rowan’s inheritance, her greedy grandmother has declared Rowan to be the illegitimate offspring of an illicit affair between her son and a seductive Irish songstress. As Prudence and Geoffrey dig deeper into the region’s undercurrent of opportunistic greed, their investigation is impeded at every turn by murder and attempted murder. They will have to work quickly to solve a convoluted case before a determined killer sends one of them on a fatal plunge . . .
Format
EPUB
Protection
DRM Protected
Publication date
November 29, 2022
Publisher
Kensington Books
Collection
A Gilded Age Mystery
Page count
304
ISBN
9781496733375
Paper ISBN
9781496733368
The publisher has not provided information about accessibility.
4743507
item