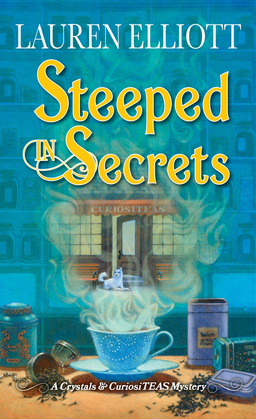 A Magical Mystery
by Lauren Elliott (Author)
Buy for $22.10 Read sample online Download sample
Fiction Mystery & detective Women sleuths
warning_amber
One or more licenses for this book have been acquired by your organisation details

USA Today bestselling author Lauren Elliott makes her hardcover debut with a new mystery series sure to appeal to fans of Laura Childs and Ellery Adams: the Crystals & CuriosiTEAS Mystery!

Even with her life in ruins in New Mexico, Shay feels uneasy about settling into the small seaside town where she grew up on California’s Monterey Peninsula and taking over an estate bequeathed to her by Bridget Early, a woman she had barely known. Her heightened senses—an empathic gift she’s had since childhood—go into overdrive upon touring Crystals & CuriosiTEAS, Bridget’s eclectic tea and psychic shop. They reach a boiling point when Shay looks up to discover a stranger’s body sprawled across the shop’s greenhouse roof . . .

With her new business a crime scene and questions brewing over Bridget’s so-called accidental death, Shay fears she’s also inherited the attention of a killer. The terrifying realization sets her on an impractical investigation for answers aided by her sister, an elusive pure-white German Shepherd, a strikingly handsome pub owner who speaks in a gentle brogue, and a misunderstood young woman with perceptive talents of her own.