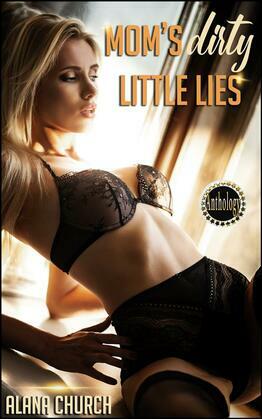 by Alana Church (Author)
Buy for €6.99
Fiction Erotica Romance Adult
warning_amber
One or more licenses for this book have been acquired by your organisation details

Randall emerged from the bathroom with his towel around his waist. His mother was on her bed, her shoes off. Without any fuss, he dropped his towel to the floor and climbed into bed.

He made a disgusted sound. "I always sleep naked, Mom. What am I supposed to do? Put on shorts and a shirt and try to sleep in them? Or maybe a three-piece suit? No way. You should try it. It's really comfortable. Especially when the air is nice and cool and you've got a nice set of clean sheets, and a good comforter. There's nothing like that feeling against your skin."

"Your loss," he said, and turned on the television.

It was a husky voice, deep and rich. If the taste of a hot-fudge sundae could be translated into something audible, it would have sounded like the tall, dark-haired, lushly rounded woman who appeared on the screen, with a smile that suggested there was nothing in the world she would rather do than crawl into bed with you.

"After hours," the woman repeated.

Stella's head jerked up. "Randall! What are you doing?"

"Well, Mom, if we're going to be paying for this hotel room, we might as well get all we can out of it. Want to watch a sexy movie? Come on. It'll be a hoot.

What do we have?" he asked rhetorically, as he began to flip through the selections. "Oh, yeah. Here's Heather Fawxx in The Changing. I've seen that. The Sexual Adventures of Helen of Troy? No, sorry. That one looks like it's got too many men in it. Oh, here's one. Lily's Dirty Bachelorette Party."

"How about me what?"

He gestured at the screen. "What do you like to watch?"

"Oh, for heaven's sake. Think about it, Randall." She sat up straight, her voice impatient. "You've seen the house where me and your aunt and uncle grew up. Did it look like your grandparents had high-speed internet? And after you were born and your daddy ran off, I couldn't even afford basic cable."