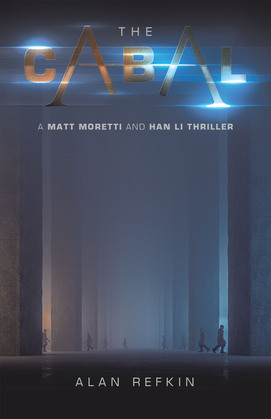 A Matt Moretti and Han Li Thriller
by Alan Refkin (Author)
Buy for $3.99 Excerpt
Fiction Action & adventure Mystery & detective Suspense Thrillers
warning_amber
One or more licenses for this book have been acquired by your organisation details

The Cabal has secretly expanded its grip on world economies, governments, corporations, and other centers of influence for decades. Founded by a mysterious person known as the thin man, its goal is to create a new world order—an authoritarian and borderless world under one government. With its members in strategic positions within global technology and social media companies, senior government positions, and enormous investment funds, they’ve pushed its narrative to billions of users until their beliefs have become mainstream.
Those within the Cabal don’t want to change the world for altruistic or egalitarian reasons. Instead, they want to establish perpetual global monopolies that would ensure extreme generational wealth while advocating that centralized government control creates greater economic stability, ratchets down global tensions, and establishes a society of equals. Standing in the way of this seemingly unstoppable juggernaut is Nemesis, an ultra-secret off-the-books organization that doesn’t follow a rulebook.
In this latest Matt Moretti-Han Li thriller, when the Cabal discovers Nemesis is after them, it uses its considerable global influence and piles of cash to frame them as terrorists. Hunted by several governments, including their own, and with time running out, they must stop the Cabal before it initiates a world-unifying event that will forge its global consolidation of power and create a new world order.