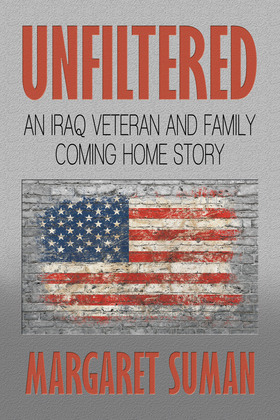 An Iraq Veteran and Family Coming Home Story
by Margaret Suman (Author)
Buy for $9.99 Excerpt
Nonfiction Biography & autobiography Personal memoirs Health & fitness Anxieties and stress
warning_amber
One or more licenses for this book have been acquired by your organisation details

Margaret Suman’s nineteen-year-old son, Mark, was deployed overseas in 2003. He was gone fifteen months, with more than a year of that time spent in Iraq at the beginning of the war. When he returned, he landed a full-time job and bought a home. At first glance, it appeared he was ready to live a stable and secure life.

But sadly, that was not to be. In Unfiltered, Suman shares her son’s battle dealing with both visible and invisible combat-related wounds during the next seventeen years and the battle with the behemoth bureaucratic systems. Taking an unfiltered look beyond fanfares and parades, it tells the behind-the-scenes account that happens to millions of veterans and their families after war, speaking out toward a code of silence with hopes of bringing perspective and awareness as a catalyst for change.

This is not just a story about Suman’s veteran son and family. It’s a story of millions of veterans. A story, based on actual events, that every American should know. Unfiltered acknowledges that wars may never end, but how we deal with the aftermath must.