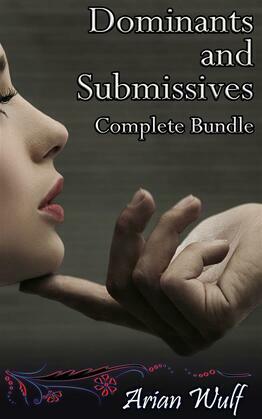 by Arian Wulf (Author)
Buy for €7.99
Fiction Erotica Romance Adult
warning_amber
One or more licenses for this book have been acquired by your organisation details

Innocent young women are willingly humiliated by the strong alpha men in this four-book bundle. Here, you will find Tanya, who is stripped and taken by strangers while being filmed, Kira, who is willing to do anything to get a job, Anita, who wants nothing more than to submit to her boss's every whim, and Anastasia, who is mistaken for another and indoctrinated into the mile high club.

He steps back and away, walking around them the way a wolf would circle prey, looking for weaknesses. She stands tall and waits to be dismissed, only to see him standing in front of them once again, not five feet away with an expression of amusement on his face.

"Right then," he says, leaning back to rest his elbows on his desk. "I'd like you to strip."

She stops breathing altogether. His voice is as dreamy as the rest of him, deep and menacing, trembling through her body like an electric current. He isn't kidding. Trent was right. He really doesn't want them there and is trying to scare them all into leaving.

Beside her, she can hear the other women's indignant protests, some "How dare you!" and a couple of, "Oh my god! You must be crazy to think-" and several, "You can't be serious."

Kira doesn't really care for all that. She takes off her jacket and folds it across her arm, carefully folding it by halves until it is a neat little square. She bends down to put it by her feet. The carpet is a soft texture on her fingers. Odd, the things she notices when she is doing something that is making her heart beat out of her chest. Her fingers shake a little when she grabs the hems of her top and tugs it up and over her head, leaving her in only her bra.

She wears her good bras during interviews, for which she is incredibly glad for right now. Her black slacks comes off next and she folds that carefully too, ignoring the way the others are staring at her in a blatant state of shock as she slowly takes off one article of clothing after another, leaving her in only her bra and undies. They don't match, but they're pretty enough, still so new that the colors haven't faded from them yet.

He looks almost proud at her and she manages to look up and meet his gaze. "Do you want me to take my underwear off too?" she asks, sounding a million times braver than she feels.

If the rest of the women aren't going to do what he asks, then she would be the one to get hired for the job. The promise of the six thousand dollar pay check fuels her bravery.

Unfortunately, the others have gotten on with the program too, taking off their clothes with trembling fingers and unflinching gazes, as if to say, 'You are not going to get this job so easily'.

Two of them choose to leave, turning around and leaving the room in a fit of rage. The only thing stopping them from slamming the door shut is the fact that the door can't be slammed shut in the first place. The automatic doors slide close, evicting them without a fuss