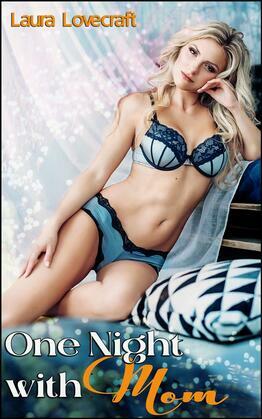 One Night With Mom

by Laura Lovecraft (Author)
Buy for €2.99
Fiction Erotica Romance Adult
warning_amber
One or more licenses for this book have been acquired by your organisation details

Evan eyed the DVD player. No, he couldn't do it. He knew what he'd see, a live version of all the hardcore pictures. But he couldn't shake the feeling he was overlooking something important. But what? How could there be another layer to what he'd already discovered?

The menu came up and he selected scene six and he thumbed play before he could change his mind. The scene opened to the actor sitting on his bed doing a poor job of playing with a game controller while pretending he was watching the TV in front of him.

"Come on, man, that's a cheat code" he declared, and even in that line he sounded like a bad actor, but these guys were hired for between their legs, not being able to perform Shakespeare.

There was a soft knock and Mom walked in wearing the expected blue robe, her heels clicking on the floor.

"I think you have a problem"

"You're eighteen, you're good looking, but all you do after work is hang around and play video games. Why don't you have a girlfriend?

"That's it?" Mom asked. "You're still a virgin and don't know if you can make a girl happy?"

"Yeah, pretty much." More bad acting as he pretended to look mom up and down. "What's with the shoes and sexy robe?"

"Okay, honey, I'll confess," Mom's acting wasn't a lot better. "I figured that was the problem. If you've never had a girlfriend, you probably never got laid."

"Lucky for you a mother's job is to always help her son no matter what, so I thought maybe I could show you."

"Everything you need to know to make a woman happy. Would you like that?"

"No one needs to know. Our little secret, and it'll just be once." She sucked on her lower lip. "Trust me, honey, one night with mom is all you'll need to be a man."

His declaration wasn't in response to the horrible line but realizing what had been nagging at him. Mom wasn't young in this video, which made sense because it was from 2017.

Only five years ago.