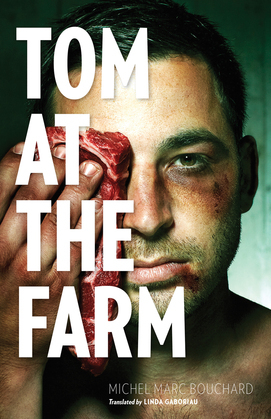 Tom at the Farm

de Michel Marc Bouchard (Auteur), Linda Gaboriau (Traducteur)
Acheter pour 16,99 $ Extrait
Fiction Théâtre Non-fiction Sciences sociales Sociologie
warning_amber
Une ou plusieurs licences de ce titre ont déjà été acquises par votre organisation détails
Following the accidental death of his lover, and in the throes of his grief, urban ad executive Tom travels to the country to attend the funeral and to meet his mother-in-law, Agatha, and her son, Francis – neither of whom know Tom even exists. Arriving at the remote rural farm, and immediately drawn into the dysfunction of the family’s relationships, Tom is blindsided by his lost partner’s legacy of untruth. With the mother expecting a chainsmoking girlfriend, and the older brother hellbent on preserving a facade of normalcy, Tom is coerced into joining the duplicity until, at last, he confronts the torment that drove his lover to live in the shadows of deceit.

The lover – the friend, the son, the brother, the nameless dead man – has left behind a fable woven of false-truths which, according to his own teenage diaries, were essential to his survival. In this same rural setting, one young man had once destroyed another young man who loved yet another. Like an ancient tragedy, years later, this drama will shape the destiny of Tom.

In a play that unfolds with progressively blurred boundaries between lust and brutality, between truth and elaborate ?ction, Bouchard dramatizes how gay men often must learn to lie before they learn how to love. Throughout 2011 and 2012, Tom at the Farm was produced in Quebec and France, as Tom à la ferme, and in Mexico, as Tom en la granja. Award-winning Quebec director Xavier Dolan adapted the play for the screen in 2013, with Caleb Landry Jones in the leading role.
Format
EPUB
Protection
Filigrane
Date de publication
29 mars 2013
Éditeur
Talonbooks
Nombre de pages
96
ISBN
9780889227606
ISBN papier
9780889227590
Taille du fichier
1 Mo
Cette publication ne comporte aucune information d'accessibilité.
477620
item