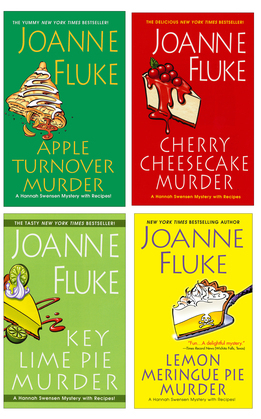 Apple Turnover MurderThe Luscious Los Angeles Times And USA Today Bestseller! Early summer brings plenty of work for baker Hannah Swensen, even before Mayor Bascomb's wife drops by The Cookie Jar to place an order for her charity event. . .for eleven-hundred cookies! And Hannah almost flips when her business partner, Lisa, suggests setting up an apple turnover stand. But she places her faith in Lisa and agrees to be a magician's assistant in the fundraiser's talent show. . . Key Lime Pie MurderNew York Times BestsellerIt promises to be a busy week for Hannah Swensen. Not only is she whipping up treats for the chamber of commerce booth at the Tri-County fair, she's also judging the baking contest;acting as a magician's assistant for her business partner's husband;trying to coax Moishe, her previously rapacious feline, to end his hunger strike, and performing her own private carnival act by juggling the demands of her mother and sisters. With so much on her plate, it's no wonder Hannah finds herself on the midway only moments before the fair closes for the night. After hearing a suspicious thump, she goes snooping?only to discover Willa Sunquist, a student teacher and fellow bake contest judge, dead alongside an upended key lime pie. But who would want to kill Willa and why? Cherry Cheesecake MurderHannah Swensen and her bakery, The Cookie Jar, bask in the glow of Hollywood glamour when Main Street becomes a movie set. And although tensions simmer as the cameras roll, no one expects the action to turn deadly. . .until it's too late. . . There's no such thing as privacy in Lake Eden, but Hannah never thought things would go this far. Everyone has been telling her what to do ever since she got not one but two marriage proposals. Movie mania soon shoves Hannah's marriage dilemma into the background and even gives her cat a shot at stardom. The Cookie Jar serves as snack central with Main Street rented out for the week. She stirs lots of fresh gossip, whipping up treats for cast and crew, including demanding director Dean Lawrence's favorite--cherry cheesecake.Lemon Meringue Pie MurderHannah Swensen thought she'd finally discovered the recipe for a perfect life. But her sometime beau Norman Rhodes tosses a surprise ingredient into the mix when he phones to tell her he's just bought a house from local drugstore clerk Rhonda Scharf--which he plans to tear down in order to build the dream home he and Hannah designed. It seems the plan has been cooking for quite some time, and Hannah's shocked. Especially since her ring finger is still very much bare. . .The good news is that the soon-to-be-torn-down house is full of antiques--and Norman has given Hannah and her mother first dibs. They uncover some gorgeous old furniture, a patchwork quilt. . .and Rhonda Scharf's dead body. A little more sleuthing turns up the half-eaten remains of a very special dinner for two--and one of The Cookie Jar's famous lemon meringue pies. Now it's up to Hannah to turn up the heat--and get busy tracking down clues. Starting in her very own kitchen. . .