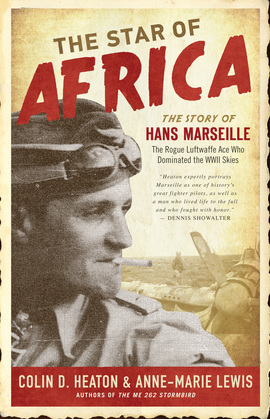 The Star of Africa

"Heaton expertly portrays Marseille as one of history's great fighter pilots, as well as a man who lived life to the full and who fought with honor." — Dennis Showalter

The Star of Africais a biography of the dramatic life and meteoric career of German Luftwaffe Captain Hans-Joachim Marseille, the "Star of Africa.” Marseille, a legendary figure in the annals of military history, had 158 kills to his name and was one of the rare recipients of the Knight’s Cross with Oak Leaves, Swords, and Diamonds, the Third Reich’s highest honor awarded for valor in combat. Unlike other German fighter aces, Marseille is also a famous figure in the public imagination in the United States and other English-speaking countries, where his rebellious nature, iconoclastic behavior, and early death have nourished his reputation just as greatly as his exceptional skill and chivalrous conduct as an adversary.