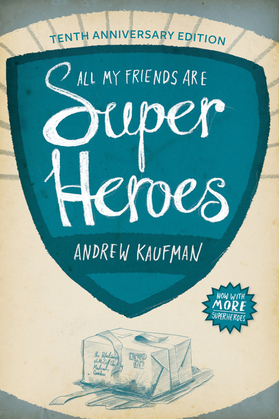 All My Friends Are Superheroes

by Andrew Kaufman (Author)
Buy for $12.99 Excerpt
Fiction Literary Humorous Classics
warning_amber
One or more licenses for this book have been acquired by your organisation details

A tenth anniversary edition of the worldwide cult favorite, now with new material and illustrations.

"One of the saddest, funniest, strangest, and most romantic books. . . . Brilliant!" —The Bookseller (UK)

All Tom's friends really are superheroes. Tom even married a superhero, the Perfectionist. But at their wedding she was hypnotized to believe Tom is invisible. Six months later, she's sure Tom has abandoned her. With no idea Tom's beside her, she boards an airplane, determined to leave the heartbreak behind. He has till they land to make her see him.

This tenth anniversary edition adds short stories, illustrations, and a foreword to the cult classic that has been a bestseller in the United Kingdom, Germany, and Sweden.