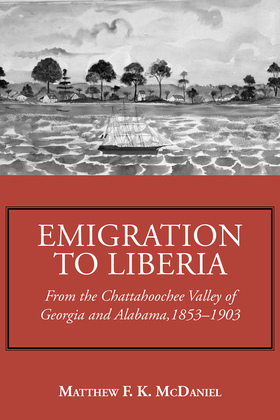 Between 1853 and 1903, some 500 African Americans left the Chattahoochee Valley of Georgia and Alabama to start new lives in the West African Republic of Liberia. Most of the emigrants departed for Liberia during the uncertainty of the post-Civil War years of 1867 and 1868. Most sought safety and escape from a still-intact white supremacist society. The ready availability of land in Liberia also promised greater opportunities for prosperity there than in the South. Black nationalism and evangelical zeal motivated others. Liberia would be their “own” country and afford an opportunity to spread Christianity throughout Africa. The emigrant group was largely made up of families and included many children; consequently, the group was of a young average age. Most were farmers, but some tradesmen and clergymen also emigrated. All faced many hardships. Some returned to the United States; however most stayed, and a small number prospered. Although the Chattahoochee Valley emigration to Liberia was a disappointment to many, a resourceful few found escape and safety from a white supremacist society and their own land in their own country. Historical sources on this regional migration are limited, but the American Colonization Society (ACS), the primary sponsor of the Liberian emigration movement, recorded demographic data on the emigrants. Some emigrant correspondence was preserved in the journal of the ACS and in local newspapers of the period. From these sources, the history of this movement, the motivations and characteristics of the emigrant group, and the experience of the emigrants in Liberia can be developed.