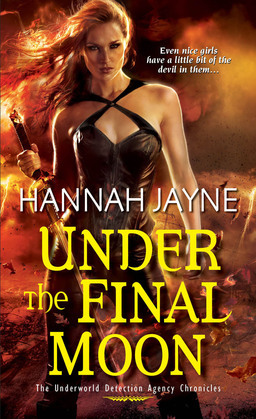 Under The Final Moon

by Hannah Jayne (Author)
Buy for $7.59 Excerpt
Fiction Fantasy
warning_amber
One or more licenses for this book have been acquired by your organisation details

A father-daughter reunion could spell the end of the world for a paranormal investigator whose dad is Satan in this wildly funny urban fantasy adventure.

Sophie Lawson may be a mere human with no special abilities except a strong immunity to magic. But the havoc she’s wreaked on the supernaturals who come up against the Underworld Detection Agency have earned her plenty of enemies. Still, a girl can’t freak out every time a horribly barbecued corpse is found with her business card in its hand. Or see a sudden glut of earthquakes, wildfires and three-headed dogs as just another day in California.

But Alex Grace, her favorite fallen angel, is concerned—or saying he is to see more of her. Getting Sophie to see all the signs of the Apocalypse is an interesting way to heat things up. Or maybe what’s making everyone hot under the collar is the fact that all Hell is about to break loose . . .

“Jayne continues to delight with the third Underworld Detection Agency novel.” —Publishers Weekly on Under Suspicion