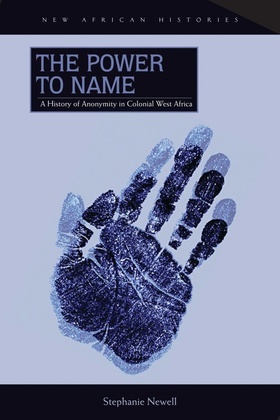 The Power to Name

Between the 1880s and the 1940s, the region known as British West Africa became a dynamic zone of literary creativity and textual experimentation. African-owned newspapers offered local writers numerous opportunities to contribute material for publication, and editors repeatedly defined the press as a vehicle to host public debates rather than simply as an organ to disseminate news or editorial ideology. Literate locals responded with great zeal, and in increasing numbers as the twentieth century progressed, they sent in letters, articles, fiction, and poetry for publication in English- and African-language newspapers.

The Power to Name offers a rich cultural history of this phenomenon, examining the wide array of anonymous and pseudonymous writing practices to be found in African-owned newspapers between the 1880s and the 1940s, and the rise of celebrity journalism in the period of anticolonial nationalism. Stephanie Newell has produced an account of colonial West Africa that skillfully shows the ways in which colonized subjects used pseudonyms and anonymity to alter and play with colonial power and constructions of African identity.