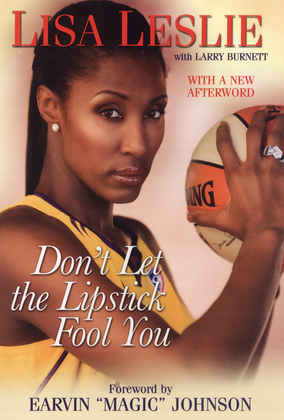 Don't Let the Lipstick Fool You

"Absolutely one of the best players ever to play the game." --Bill Walton

A three-time Olympic gold medalist, three-time MVP of the WNBA, and the first woman ever to dunk in a professional basketball game, Lisa Leslie is considered one of the greatest players in the history of women's basketball.

But before the superstar was the child growing up too fast in South Central Los Angeles. Over six feet tall in the sixth grade, with a father Lisa never knew, and a sister she couldn't trust, her life seemed destined to go nowhere fast--another failed statistic in the American dream.

Today, Lisa is a poised, beautiful, assertive, six-foot-five-inch basketball powerhouse. Her elegance and charm have made her a favorite with fans, the fashion world, and even Hollywood. With hard-won candor and confidence, Lisa Leslie shares in her own words her empowering story about finding grace under pressure, and exceeding expectations--including your own--by playing like a girl.

"There are a lot of young girls out there who look up to Lisa Leslie. I think it's great that they can look at Lisa and say we don't have to make sacrifices." --Sheryl Swoopes, Houston Comets and U.S. Olympic Team

"She has it all: beauty, brains, and athleticism. She brings class, fashion, and she's sassy in her own way. She has all that and the championship rings to back it up." --Nancy Lieberman, ESPN analyst and Hall of Famer

"Lisa Leslie is absolutely one of the best players ever to play the game. She is a leader who works hard, plays hard, and carries herself with incredible poise, grace and dignity. She is an icon and a perfect role model." --Bill Walton, ESPN commentator and NBA Hall of Famer

Larry Burnett is an Emmy award-winning journalist and sports broadcaster. He has known Lisa for fifteen years and has been the radio and television play-by-play announcer for her L.A. Sparks' games for the past nine seasons. Burnett has anchored Sports Center and The NBA Today Show for ESPN, and he has hosted the Lakers' radio broadcasts and The Phil Jackson Show.