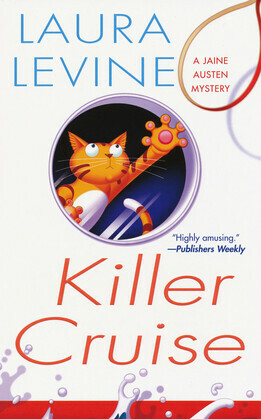 Jaine Austen #8
by Laura Levine (Author)
Buy for $8.54 Excerpt
Fiction Mystery & detective Women sleuths English literature American and Canadian literature
warning_amber
One or more licenses for this book have been acquired by your organisation details

Wordsmith Jaine Austen’s ship has finally come in. Her new teaching gig on a fancy cruise line nabs her a free vacation—and access to a 24-hour buffet! But sooner than you can say “bon voyage,” Jaine’s all-expenses-paid trip to the Mexican Riviera seems destined to be a wreck . . .

Things are already off to a rocky start when Jaine discovers a stowaway amidst her luggage—her persnickety cat Prozac. Jaine’s sinking sensation grows stronger at dinner, where she meets chatty Emily Pritchard, a wealthy seventy year old who’s traveling with her two nephews. Jaine can’t help noticing the tension among them, especially when the cruise’s charming—and sleazy—British dancer, Graham, whisks Emily out onto the dance floor.

Soon Emily is accepting Graham’s invitations to every social event on the ship. Two nights later the bubbly couple announces their engagement, but the news is quickly overshadowed the next morning by the discovery of Graham’s body with an ice pick protruding from his chest . . .

Between hiding a furry fugitive, flirting with Emily’s nephew Robbie, and baiting the hook for a clever murderer, Jaine is about to dive into her most dangerous case yet . . .